"Two things I asked of God" 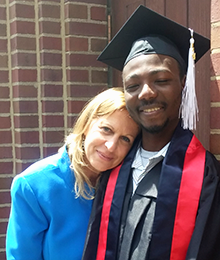 Recent graduate, Kesmy, with Ann, the woman who helped him travel to the U.S. and attend Moody Bible Institute.

When Kesmy was growing up in Haiti, he would climb to the top of a mountain every day at 4 a.m and ask God for two things.

"I would sit in the same spot with the cool breeze and feel the presence of God," says Kesmy. He would ask, first, that his dad would become a believer; and second, that he could attend Moody Bible Institute.

This May, Kesmy graduated from Moody as a member of the Class of 2014. As he walked across the platform to accept his diploma, his fellow students, friends and family members celebrated.

Kesmy's graduation marks the end of a long journey—one that began in tragedy and ended in triumph.

When he was just 12 years old, Kesmy fell into a fire and was taken to his Haitian village's witch doctor for healing. When that did not help, he was brought to a hospital where doctors were forced to amputate his arms to save his life. Missionaries at that hospital prayed with Kesmy and shared the gospel with him. That journey was no doubt on the minds of his classmates, friends and family who attended the ceremony.

His mother, Yvonne, was unable to secure the necessary visa to leave Haiti and attend her son's graduation. The mother of 12 wanted nothing more than to see her son accomplish this goal. Knowing travel was now impossible, church friends in Haiti helped set up an Internet connection, so Yvonne could witness her son accept his Moody diploma through a live video stream.

In Chicago, Kesmy's "American mom," a missionary named Ann, was in the audience. Ann first met him at the hospital. She said Kesmy's Haitian village was "the very poorest village I have been to. They literally live in thatch huts without clean water to bathe or drink. It is very common to go to bed hungry."

Ann, along with other Christian friends, helped Kesmy travel to the United States, get medical help and begin ministry training at Moody Bible Institute.

God answered both of Kesmy's prayers. He graduated from Moody, and, last year, he learned that his father had accepted Jesus as his personal Savior! This answer, however, was both sweet and bitter, because, at the same time, he learned that his dad did not have long to live.

His four years at Moody Bible Institute have left an enormous impact on Kesmy's heart and life.

"It encourages me and humbles me to see God's expression of love to me in other people's lives," said Kesmy. "God has blessed me so much. How little I do for Him."

As he completes his education at Moody, Kesmy has more requests to bring before God. He would like to see a training center for pastors in Haiti as well as a home that would care for and educate children.

"I just love biblical theology," he said. "I'd love to train lay pastors in Haiti and invest in the church as well. With my pastoral degree from Moody and a master's in theology, I can train leaders."

He is also planning a home where children can learn how to become leaders, how to develop their spiritual life and get an education.