Story of Noah: Fact or Fable? 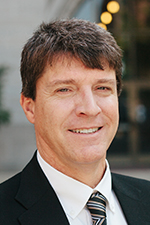 Moody professor, Bryan O'Neal, was featured in the Chicago Tribune and a public debate at Loyola University.

Is the story of Noah and the ark truth or fable?

In response to the recent Hollywood movie-production Noah, Moody professor and dean of the undergraduate faculty Dr. Bryan O'Neal was asked to participate in a published "dialogue" with Chicago Tribune columnist Eric Zorn about the biblical story of Noah.

The Tribune article, "There's Something About Noah" begins with this statement:

To coincide with ... [the] release of the feature film "Noah," I [Eric Zorn] asked theologian Bryan O'Neal, dean of the faculty at Chicago's Moody Bible Institute, to exchange e-mails with me about the Biblical story on which it's based.

Briefly, that story says that God was so aggrieved by the wickedness of mankind in ancient times that he sent down a flood that killed every living creature on the planet save for Noah, his family and the animals they stowed on a massive ark.

Whether it's a primitive fable or a historical account, this strikes me as one horrific tale.

How literally do you take the biblical account? And how do you square it with the conception of a merciful and loving God?

Their published dialogue and O'Neal's claim, that the Bible provides a reliable and literal record of the event, sparked public controversy.

The dialogue was a series of questions and responses between O'Neal and Zorn over the course of one week. The results of their discussion were published in the Chicago Tribune. At Moody, we were privileged to have O'Neal so clearly articulate his defense of Scripture as the inspired, inerrant Word of God. Here he begins his claim:

I take the biblical flood account historically. But even if the story is figurative or mythical, the point of its inclusion in Scripture is to teach us something about God and his character—or us and our character.

Read the entire dialogue between O'Neal and Zorn >

Dr. Bryan O'Neal is a 1987 graduate of Moody Bible Institute. It was at Moody that he met and married his wife, Denise, also a fellow student. He earned his master's and Ph.D. in philosophy from Purdue University. Prior to returning to Moody as a faculty member, O'Neal served for 13 years as a pastor in Indianapolis, Ind.

In addition to his article in the Tribune, O'Neal has been invited to practice apologetics in several public debates. The most recent, at Loyola University in December 2013, asked the question, "Does God Exist?" To have the opportunity to articulate the truth of God in a public forum can be challenging, but O'Neal sees this as an integral part of his faith.

"This was a matter of prayer," said O'Neal. "I was teaching apologetics, but realizing that I wasn't engaged in public apologetics. I gave it to the Lord. Soon after, I received my first invitation to debate."

O'Neal says many people view debates like a sporting match, with both sides committed to preconceived views. He disagrees, "I think there are people who want honest answers to their questions and they are using the fact that they haven't been given honest answers as an excuse to not believe. In both debates, I've had audience members who began conversations with me that continue to this day."

Moody Bible Institute teaches that Scripture is the inerrant, inspired word of God. Our doctrinal statement says: "The Bible, including both the Old and the New Testaments, is a divine revelation, the original autographs of which were verbally inspired by the Holy Spirit" (2 Timothy 3:16; 2 Peter 1:21).

"The Noah story is a good example of why we need to take our Bible seriously," said O'Neal. "We need to have confidence in the Bible's answers."

Eric Zorn allowed his guest blogger to conclude the discussion with a final word. Here O'Neal emphasizes not God's wish to punish mankind, but to redeem humanity through His love:

A good place to end is on a point of our agreement—I think you are right (!) when you say there is no contradiction between the glory of God and the well-being of man.

A classic Christian confession is that "the chief end of man is to glorify God and enjoy Him forever"—that we are best off when we love and enjoy God.

This was a true today as it was in the days of Noah—when God was not slow concerning his promises but patient, pausing that we might turn to him, in love.