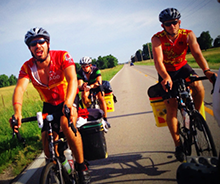 The Freedom Riders are cycling from Georgia to California, raising money and awareness to defeat human trafficking.

The night before their championship game last November, most of the soccer players from Moody Bible Institute were in bed dreaming about their third national competition. But junior Jon Forsythe and sophomores Tim Schwan and Benjamin Wallace stayed up late discussing another dream: riding bicycles from coast to coast to fight human trafficking.

This summer, that dream became a reality. On May 28, the students—joined by two more members of the Moody men's soccer team, graduating senior Ben Cole and sophomore Mitchell Treece—set out from Savannah, Ga., with a goal of cycling 3,300 miles to reach San Francisco on July 16.

Calling themselves the Freedom Riders, the five men plan to cycle about 80 miles a day, using that time to memorize 200 passages of Scripture, pray together and enjoy the scenery. They also hope to offer a helping hand to people they meet along the way, by cutting grass or painting a fence.

"Our desire is to go across the country and demonstrate God's love to people," says Benjamin Wallace.

Ben Cole adds, "We want to tangibly share the gospel as well as verbally speak it."

Carrying supplies on the racks of their touring bikes, they will set up their tents in the back yards of welcoming homes. Sundays will be a day of rest, as they worship God and share their mission in Bible-teaching churches along the route.

While the first days of any trip are filled with excitement, the challenge of keeping to their goal of 80 miles each day while battling fatigue, bad roads and flat tires, could discourage even the most optimistic traveler.

The main mission of the Freedom Riders is to draw attention to the scourge of trafficking around the world and the efforts of the A21 Campaign, the largest anti-trafficking organization in the world. Featured during Moody's Missions Conference in 2013, A21 is working to abolish the illegal trade of human beings through awareness education, protection and restoration of survivors, and prosecution of traffickers.

With an estimated 29.8 million victims of sexual trafficking in the world, the Freedom Riders would love to raise a penny for every 10 people enslaved, for a total of $29,800.

"We want to represent the enormity of the issue while still bringing it down to a singular person," says Ben Cole.

The team prepared for the journey during the spring semester, both physically and spiritually. Jon joined their Bible professor and triathlete Dr. William Marty for 60-mile rides on Saturdays. On Fridays, the team fasted and prayed together for the end of trafficking and for the trip's success.

"We're praying people will be open and receptive to what we say about Jesus," Jon says.

The Freedom Riders are posting photos, videos and updates about their trip on Facebook. Pray that many will come to know Christ, people will join the cause in the fight against human trafficking, and that they will finish the tour safely.

Want more stories like these?
Sign up for the monthly Reach e-newsletter, and we'll send articles to your e-mail inbox.