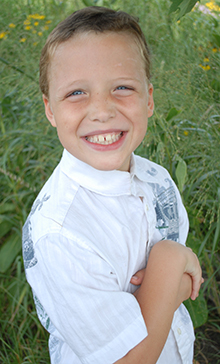 Josh, a nine-year-old boy with autism, is soothed by nature. He likes memorizing Scripture in the forest preserve near his home.

When six-year-old Joshua bolted out the door and into the street for the second time in two years, the police warned his mom, Elizabeth Vesely '96, that if he was hit by a car, the charge would be a felony. She and her husband, Dan, have four other "neuro-typical" children who respond to the giving of consequences and privileges, but not Josh. He would not obey rules and had no sense of right and wrong.

At age six he was functioning at the cognitive level of an 18-month-old—unable to control his impulses or communicate with intelligible speech. In school, he would pinch and bite his teachers, push students and take their belongings. He threw tantrums and didn't make eye contact, even with his mother.

Through diagnostic testing, Josh was found to have moderate to severe autism, a developmental disorder that affects 1 in 68 children, according to the Centers for Disease Control. He was also diagnosed with attention deficit hyperactivity disorder and other challenges.

Facing the reality that Josh would not "grow out of it," Elizabeth cried out to God for help.

She also sensed, however, that God had prepared her for this role. From the time her mom sent her, at age 10, to play with a neighbor boy who had Down syndrome, she developed a heart for people with intellectual and developmental disorders. In high school, she spent lunch hours feeding students who could not feed themselves. After she became a Christian in Navy boot camp in 1991, she attended Moody to learn how to help these children.

At Moody, her Practical Christian Ministry assignments often focused on helping the most challenging kids-from teaching her pastor's intellectually disabled daughter Bible stories to mentoring a "little sister" from a low-income housing project in Chicago.

"Because of the experiences I had, I was able to see that anything is possible with God," she recalls.

Elizabeth spent one semester in an internship working with foster care children at Real Life Children's Ranch in Okeechobee, Fla., where she learned the value of consistency in discipline.

"I felt more strongly than ever that my gifts and calling were to help children who have various needs."

Yet having a child with autism did not come with an instruction manual, and Elizabeth often felt like a failure. Sunday mornings were a challenge as the Veselys struggled to find a church that had the staff and understanding to accommodate their son. Other children sometimes poked fun at Josh.

Some of the adults implied his behavior came from bad parenting.

Elizabeth asked a Christian friend, "What do you think Jesus would do for my son?" Her wise friend said, "He would have compassion on him."

Pondering those words, Elizabeth searched online and discovered a family-oriented program called The Son-Rise Program, which emphasizes parents' love for children with autism. After converting a room in their house into a distraction-free playroom with shaded windows, she put contact paper on the wall and joined Josh in scribbling on it. When he ripped the contact paper off the wall, she painted the wall with chalkboard paint, and they began scribbling again.

"You learn to love first and react second," she says. Within months, he made eye contact, and eventually he was drawing trees, rainbows and people.

To provide more one-on-one help and time for exercise, Elizabeth removed Josh from public school and home-schooled him. The changes were remarkable. Six months into the program, which included diet changes and other therapies, he responded to the gospel through an Easter game and said, "Jesus, I want you in my heart."

Elizabeth was encouraged. "That really convinced me that I was on the right path, that God was working through me to reach this 'unreachable' child," she says.

Now age nine, Josh is potty-trained, calls out his siblings' names, and functions like an average kindergartner.

"I have a list of 35 troublesome behaviors he doesn't do anymore," says Elizabeth. "And our family finds real delight in him."

She thanks God for College Church, a church they joined in Wheaton, Ill., that has a program for families with intellectual and developmental disabilities. She also is grateful for the helpers she's trained from her church and community. The support has been helpful not only for her son Josh but also for her marriage.

Parents of children with autism have additional stress, Elizabeth says, but her marriage is thriving "by the grace of God, which is sufficient even for autism."