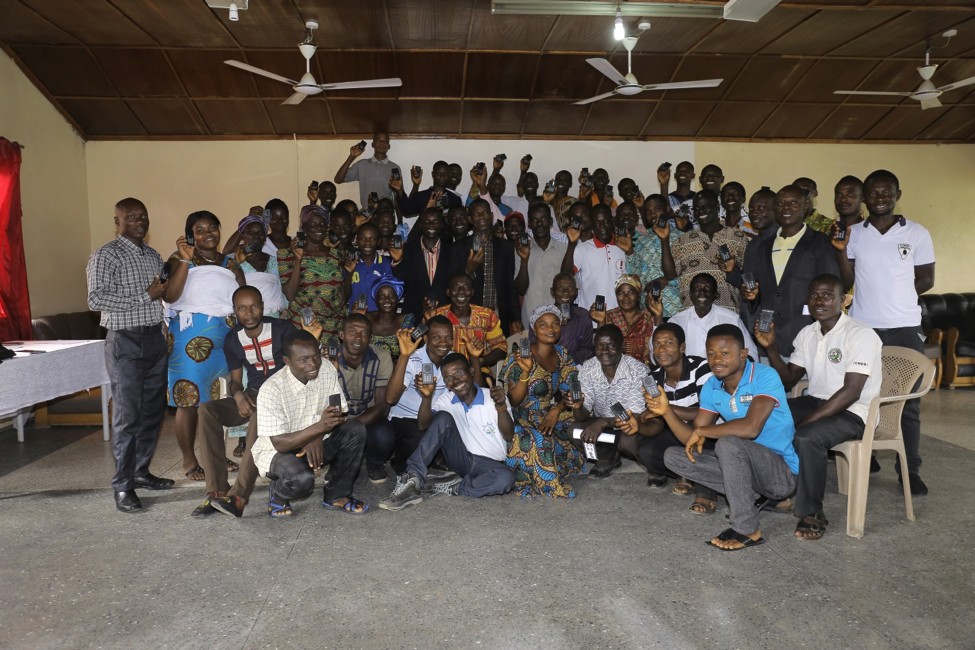 Radio School of the Bible, one of Moody Radio’s longest-running teaching programs, has been given new life in Ghana, in the form of audio Bible lessons for African pastors and church leaders in their own language.

Working with Theovision, a nonprofit ministry organization in Ghana, Moody Radio has translated and recorded classes of Moody’s Radio School of the Bible on solar-powered audio players, giving pastors and church leaders in rural villages access to theological and biblical education.

“It’s something that was just sitting here on the shelves at Moody Radio, but now it’s going to have a huge impact on the people of Africa,” said Stephen Asare, Moody alumnus and son of Theovision founder, Rev. Theodore Asare. “I see this growing, not just in Africa but in other countries as well.”

"Moody Radio School of the Bible in the Akan language is one of the best things that has happened in our ministry of reaching the oral cultures with God’s Word in Africa,” Theodore Asare said.

“This training is the first of its kind that I know of in Ghana. Already, other language groups are asking for such training to be done in their language.”

Moody Radio School of the Bible began as a radio program in 1926, the first correspondence Bible study program ever offered by radio in the United States. Thousands of listeners enrolled in the 40 complete courses that aired through 2002. Today that programming is being repurposed for global use to equip Christian leaders who will impact their communities for Christ.

Recruitment for the program began in March 2016 in Ghana. Theovision staff members traveled to the Akan- or Twi-speaking areas looking for pastors or church leaders in rural communities who had little or no Bible education. From these applicants, 250 people were selected to participate in the first year trial.

The project required transcribing the audio programs under the direction of Doug Hastings, Moody Radio’s general manager. The written transcripts were then sent to Theovision’s team in Ghana for translation into Akan, the local language. The resulting programs were recorded to be played on solar-powered audio devices, designed for use in rural areas with limited access to electricity.

In July 2016, a pilot group of 250 Christian leaders from Nsawam, Adoagyire, Asamankese, Asin Fosu, and Kumasi/Sehwi in Ghana gathered in several area locations to receive instruction on participating in the pilot program.

One participant, Joshua Afari, said, “This device, with Bible courses in our language, is going to be helpful to everyone, especially to those who cannot read and in rural villages where there is no electricity. Through this oral School of the Bible, Christianity will see a lot of progress in our part of the world.”

After attendees were given solar-powered audio players and taught how to use them, they were told they would receive weekly exams on their mobile phone. Their first courses will include The Life of Christ, Basic Christian Doctrine, and Old Testament/New Testament Surveys. At the orientation, participants were also given practical instructions about how to charge their audio devices and how to answer quiz questions.

According to Stephen Asare, the program addresses a need for biblical and theological training in Africa.“A lot of the people have a passion to teach God’s Word, but they lack training. This is helpful as they dive more into God’s Word. It has lot of meat to it,” he said.

After Stephen graduated from Moody Bible Institute in 2008, he returned home to Ghana, where he realized that many pastors did not have access to the theological training that Moody offers. Stephen, now the manager of Donor Appreciation at Moody, and his father share a commitment to equip Christian leaders around the globe.

“This will start a whole movement of pastors who know the Bible and have the confidence to take it out into the world.”

Currently the teaching program has a waiting list of applicants for next year. In the meantime, Moody Radio and Theovision staff members are transcribing, translating, and recording more of the courses. “The goal is to take this set of pastors through the program and then add new people,” Asare said. “It’s a great partnership.”