A Navy Mom & An Unthinkable Accident

Katie (Burke) Hessler never expected to pursue ministry within the military and then be tested through personal tragedy. But God has used her to reach fellow Navy wives at the United States Naval Force base in Jacksonville, Florida, with the gospel. 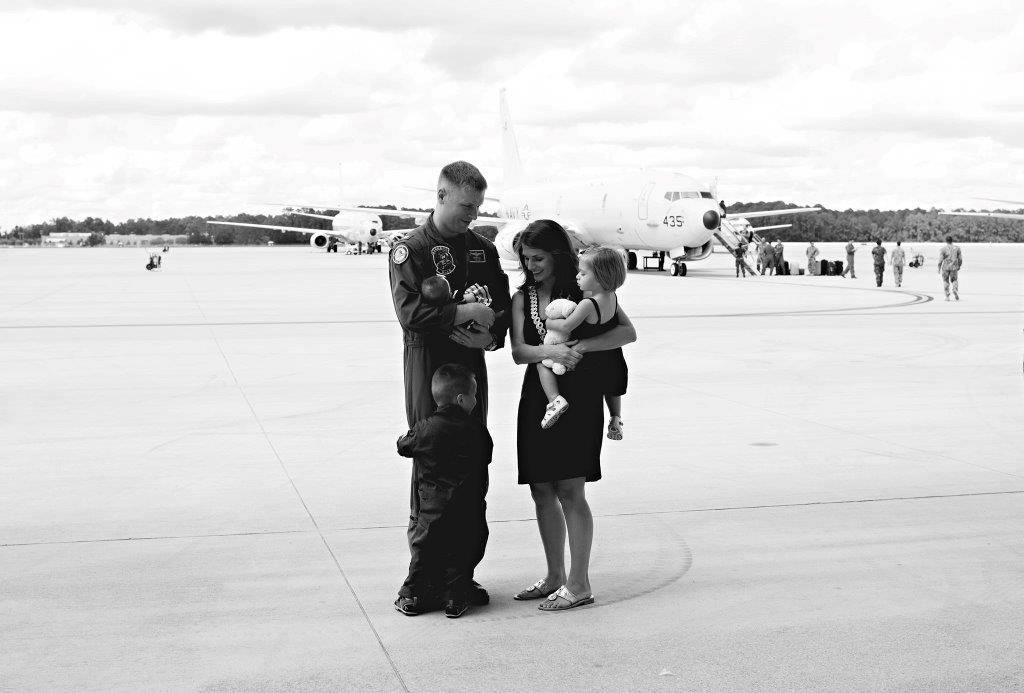 Katie met her husband, Charley, in Annapolis, Maryland, where he was attending school. Katie, who graduated from Moody Bible Institute in 2009, had been using her Communications degree to serve at a missionary organization in another state. But she soon fell in love with the handsome, aspiring pilot, and the two were married.

The Hesslers moved to Corpus Christi, Texas, so Charley could attend flight school. And just three months later, she was pregnant with their first child. “I went through huge changes in a very short time,” Katie explains. Those changes put stress on their young marriage and on Katie herself.

Facing Challenges as a Military Wife

As a new military wife, she remembers facing discouragement. “I hated the area. He was busy in flight school with training.” Plus, she was realizing her life would never be the same. “With the flight schedule, you never know what your husband’s assignment will be until 5 p.m. the day before. I thought, ‘What have I done?’”

After nine months, the couple relocated to the Jacksonville base, where Elliot was born. Then, just after discovering she was pregnant with their second child, Charley deployed, leaving for seven months. “There are sacrifices in military families you don’t see,” she explains. “As a Navy wife, you have to be a single parent for extended months. It can be overwhelming.”

Back on the base, Katie began a weekly Bible study in her home with a friend. “It started with women who lived on base, then people began coming from the outside neighborhood as well,” she says. Through these studies, Katie was able to use her Moody training, helping women, some who had never read God’s Word, to understand it more deeply. She even introduced them to apologetics. “They were not just hearing the Word but also seeing a defense for it,” she says.

“It has been such a huge blessing to have that foundation of Bible and theology,” Katie says. “A bunch of my friends have gone to Christian colleges, but they didn’t get the solid teaching I got at Moody.”

Her biblical training in apologetics has helped her interact with a wide range of people. “It has served me so well now,” Katie explains. “The Word of God stands up to everything.”

But she did not expect her faith to be rocked the way it was in April 2017. One spring day, Katie and Charley faced every parent’s nightmare. Celebrating Charley’s return from deployment, the family was headed to the park when Elliot (then age three) slipped from their side and was hit by a passing service truck, both sets of wheels crushing his small body.

The heart-stopping accident shook Katie to her core. In the moments following the accident, Katie remembers screaming and dialing 911. Not wanting to wait, they drove to the ER holding their unconscious little boy. Katie was praying out loud.

Despite their worst fears, Elliot survived the ordeal with only a collapsed lung and broken pelvis. “He should not have lived,” Katie says. “The doctors kept saying there was no way he was run over, but I saw it myself.”

News spread of the accident with even the local television news station covering the event, and people began to pray for Elliot and the young family. Katie remembers thinking, “I do not have this in me.” But a friend said, “You don’t have to do this. Remember, when you’re weak, that’s when God is strong.”

During the next difficult weeks of recovery, Katie clung to everything she had been taught, knowing that the Lord had miraculously protected their young son. She determined to share her faith-affirming story with as many people as possible. She even met with the driver of the truck. “I hugged him,” Katie says. “I had wondered about him, spiritually, so I said, ‘Look, the most important thing is that you know Jesus as your Savior.’” He started crying and told her he had walked away from the Lord many years ago. The accident had shaken him.

Katie’s story, shared in person, on social media, and even on a televised news report, has inspired many others to seek more truth or to press on through difficult circumstances. One friend told Katie, “You brought me back to God and kept my faith in Him strong. My love and faith in God are stronger today than they have been in my entire life. Honestly, I owe this to you.”

Katie says, “So many people don’t have a strong foundation for their faith, It’s really lacking in my generation. It’s often nominal. So when suffering hits—and it hits everyone—they have nothing to fall back on.”

She continues to seek new ways to reach out to the community where God has placed her. “The military has its pros and cons, but because of the lifestyle you definitely connect with people in a more intimate way than outside. Over deployments, most people are away from family, you’re not from the area, so you have to lean on the community to survive.”

Katie will tell you, “I’ve learned through my suffering. People don’t want to be ministered to by someone who hasn’t suffered. So I hold nothing back when I share my testimony.” By being open about her own struggles and the God who gives her strength, Katie has been able to help others.

“I think people have the wrong image of Christians, but when you’re ministering to people and you know who you are and it’s nothing that you’ve done, that it’s only because of Christ in you—that speaks to people.”