Moody Prepares the Pattys for Ministry in the Czech Republic 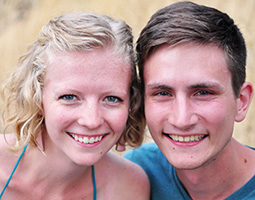 The Czech Republic has a rich history of faith, including influential Christians such as John Hus and the Moravian Brethren. But "that rich theological soil has been swept away by communism," says Tyler Patty, a Moody student who grew up in the Czech Republic.

While communism no longer holds sway in Eastern Europe, the atheism it left behind does. Only half a percent of all Czechs are evangelical believers!

Tyler, who graduated this December from Moody Bible Institute in Chicago with a bachelor's degree in youth ministry and biblical studies, has a desire to restore Czech to the vibrant faith of past centuries.

Tyler was only three years old when he moved with his family as missionaries to the Czech Republic. His dad cofounded Josiah Venture, emphasizing youth ministry. Tyler accepted Christ as Savior at age 7 and while in high school helped lead worship for his youth group. He was mentored by a fellow missionary who showed what it means to follow Jesus day by day, Tyler grew in his desire to devote his life to ministry. "I couldn't imagine doing anything else," he says.

When it came time to choose a college, Tyler visited several. One event at Moody sealed the deal for him. While visiting the campus, he stayed on the third floor of Culbertson Hall, a men's dorm, when the guys held a "pancake night." Students ate pancakes, enjoyed fellowship, and shared testimonies. It was more than just fun; the guys built each other up. They had the kind of community Tyler desired.

Community was a highlight of Tyler's time at Moody. He developed close friends who spurred him on in his faith. He became manager of Joe's, the campus coffee shop, where he enjoyed teamwork and friendship. Off-campus, he served in youth ministry at Grace Church of DuPage, one of his family's supporting churches.

Another highlight was Tyler's introduction to a Moody student named Lara Ragan. Lara, who recently graduated with a communications degree, also grew up in a missions context, taking numerous short-term mission trips. They were married during their junior year.

Coming from a ministry context, Tyler valued the practical ministry training he received at Moody, but he also realized his passion for theology. He considers his interdisciplinary major in youth ministry and biblical studies ideal preparation for the ministry he wants to do in the future.

Tyler and Lara spent this past summer, following their graduation, in the Czech Republic serving with his family, but they are now back in the United States. Tyler plans to study Old Testament and Semitic languages in graduate school, followed by a doctorate in Old Testament theology.

He has a mission: "I want to reengage theology for my generation."

He and Lara plan to return to the Czech Republic and "be part of pioneering a new system of theological education for the church."

Eager for the next chapter of their lives and ministry, he and Lara are especially grateful to the people who faithfully give to Moody.

"Missionary families supported by donors don't have a lot of extra," he explains. "The tuition-paid education allowed me to pour into my classes and really invest in my time at Moody. Lara and I can leave debt-free and go on to further education and then to missions even sooner."