Why would a pro-football player pursue a master's in theology? 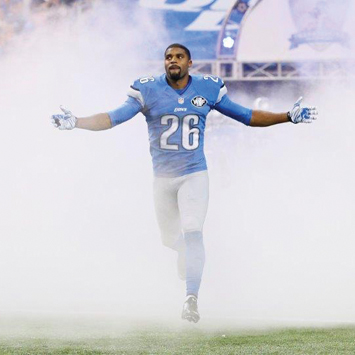 Don Carey balances a professional football career with community ministry, being a husband and new father, and attending Moody Theological Seminary. He never expected the seminary part, but says, “I love going to class.”

Carey, who is pursuing his Master of Theological Studies in Old Testament on the Michigan campus, grew up in a Christian home. “I came from a family of pastors, evangelists, preachers, and teachers. My great grandfather built a church himself,” Carey explains.

“It was not an option not to go to church.”

As he saw his single mom struggle to raise her children alone, giving up meals so they could eat, he began to question his childhood faith. Carey determined that his life would follow a different path. “Anything I grew up with—especially the negative things—I tried to do the opposite,” he says. “I included Christianity in that pile of things I did not want.”

Carey developed what he calls a “self-made mindset.” He thought, I’ll be the author and architect of my future. “Going down that path led me away from God.”

He found personal success after graduating from Norfolk State, when he was recruited by the Cleveland Browns. Carey then played two seasons for the Jacksonville Jaguars and was finishing his fourth season as a safety for the Detroit Lions. Despite these career achievements, he was still searching spiritually. In 2011, during the NFL lockout, a fellow player invited Carey to attend the annual Pro Athletes Outreach conference in Orlando, Fla.

Carey says the invitation triggered the start of his journey back to God. “After the conference, I asked a simple question,” he told a Detroit newspaper.

“I said, ‘God, if you’re real, just show me.’” The years that followed drew him back to God and to His Word.

About a year ago, Carey told the Lions' chaplain about his desire to learn more about the Bible. The chaplain connected Carey to a Moody alumnus who helped him study Scripture. He suggested that Carey consider seminary.

Today, while still playing for the Detroit Lions, Carey is also learning to articulate his faith in a wise and compassionate way through his studies at Moody. “I’m controversial by nature, so I had to grow from debating everybody. When I first became a believer I spent all my time reading, studying, learning the Bible. I would go straight to social media and post, hoping to get a response. That’s my nature—I like to get people talking about things.”

The more he learns about God’s Word, the more he desires to share with others in a way that will help them hear and understand. “I look at apologetics like the seasoning and the gospel is the actual steak. If the seasoning is too much, nobody’s going to eat.”

He desires, one day, to earn his PhD in philosophy.

“I want to teach people to share their faith and give them the tools to actually do it.”

Carey and his wife, LaKeisha, recently celebrated the birth of a son and have founded Don Carey International Ministries (dcimin.org), a parachurch organization geared toward preaching the gospel of Christ with the hope of biblical repentance and discipleship. Carey also launched a STEM program (science, technology, engineering, and mathematics) in two local Michigan schools where he interacts with children, giving them encouragement to pursue their dreams.

Life can be overwhelming with the demands of the NFL, community ministry, seminary, and home. “The first month of classes I would come home and go straight to bed. I was exhausted mentally, spiritually, and physically,” Carey said.

But despite the intensity of his schedule, he is enjoying his seminary work. “I love sitting in class. They are long hours, but the information is so profound, you learn so much. The time just flies by.”

He appreciates the family atmosphere of the Plymouth, Mich., seminary location. “The classrooms are small and intimate. You can pause and stop the professor and ask questions."

"My professor is like a walking encyclopedia. Whenever I have a question, he answers it in depth."

For Carey, combining pro-football with seminary has been both challenging and satisfying. “I love every minute of it. I feel like I am using my time wisely.”