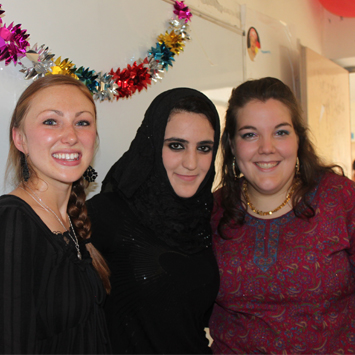 After teaching English in a Middle Eastern city for her summer internship, Christina ’10 hoped she was finished with cross-cultural ministry in the Muslim world.

“I begged the Lord to never send me there again!” she recalls. During her senior year in Moody’s TESOL program (Teaching English to Speakers of Other Languages), Christina developed great passion for the Muslim people.

“By the end, I was pleading with Him to allow me the privilege of serving Him there.”

For the last three years, Christina has been doing just that—living in a city that is 96 percent Muslim and has almost a million Kurdish refugees.

Besides teaching English and studying the Kurdish language five days a week, she is “making home-visits where relationships are deepened and truth is shared,” she says

“I can honestly say, not a day here goes by that I am not thankful for my MBI education,” she adds. “I am grateful for the wisdom my professors imparted to me which is practical in all things, whether sharing the gospel, confidently teaching English to my students, or living well in a culture not my own.”

Christina is working with her church in the area to provide basic necessities for the massive influx of Kurdish refugees who are living in tents after being rescued from terrorists. Last winter she helped distribute 4,000 heaters in one camp.

“It is incredibly amazing to hear from the mouths of the people that ‘followers of Jesus brought us this heater!’” she says.

Her church also purchased hundreds of thick blankets to pass out to families living in an unfinished school building.

“The hands and feet of Christ are at work here, and though we are few, nothing is impossible with God!” says Christina, who serves with one other teammate.

Their team leader, who attended Moody for two years, lives in the U.S. The team is growing, though. Another Moody graduate, Michelle ’09, and her husband, Mark, are preparing to move to the Middle East in 2016.

Like Christina, Michelle first visited the Middle East during a two-month summer internship for her TESOL degree. She accompanied Andrea, another team member who has been planning the summer programs (teaching English to 100–200 Muslim adults) for the last dozen years.

By 2012 Michelle was almost fully supported to move to the Middle East when she met Mark, a young man in her Michigan hometown who wanted to pursue a relationship.

She told him, “You know, I’m going to the Middle East for the rest of my life, and I’m not going to change my mind.”

Michelle’s friends warned Mark of the same thing, but he was so enamored by her commitment that he decided to take a short-term trip to the Middle East himself. He came back with a similar fervor and burden for Muslims.

Mark and Michelle married in 2013 and moved to Virginia to work with Kurdish people and learn the language while they raise the rest of their support. Once in the Middle East, they hope to work with the team to start a year-round English institute. Long term, their prayer is to see a church planted.

Bearing Fruit, Amidst Fear, with Prayer

Already God has allowed the team to see some fruit among the people and has continued to give opportunities to plant and water seeds. Michelle says she knows three of about 10 Kurdish believers in the city.

For example, one young man who was in Michelle’s English class during her internship became a believer after hearing Michelle and Christina share the gospel with their students at a restaurant. The man presented the gospel to his Muslim cousin a couple of months later. But under the threat of social rejection and persecution, he is too terrified to tell anyone else.

Another young man moved to the U.S. after his wealthy father found out he’d become a believer and warned his son to leave. The young man’s family also threatened to cut off all communication and his large inheritance unless he agreed to marry a Muslim woman, so he is currently engaged to one. What’s more, the engaged woman’s brother threatened to kill him if he broke the engagement.

The team continues to pray for him and others who fear persecution. Now that Islamic terrorist groups like ISIS are moving into the area, life is “extremely unpredictable” in this Middle Eastern country, says Christina.

“My team leader always reminds us that we are not going with plan A or B; we are heading straight to plan G, which is God’s plan!”

No matter what happens in days ahead, Christina says she is committed to following Christ. “I am buckled in and ready to continue serving the Lord!”

Considering the unrest and dangers in the Middle East, friends and family have asked Michelle if she is still planning to go. Michelle, who grew up reading the Bible as well as a book about Christian martyrs (Jesus Freaks by DC Talk and The Voice of the Martyrs), has an answer.

“The Kurds will never get an opportunity to hear about Jesus if we wait until there’s peace to go and tell them.”

Besides, she says, “I always knew I would go somewhere dangerous. I thought if soldiers can go to war and fight for America, why shouldn’t I be able to go and risk my life for a greater cause?—and that’s Christ.”

Moody graduates serve throughout the world in dangerous locales. To protect the identity and safety of international believers, we have changed some of the names in this story.