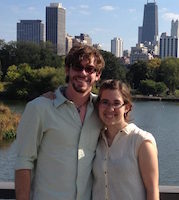 When Jonathan McDaniel would sit in class or in meetings, he would find himself doodling in the margins. What Jonathan did not expect was that his artistic skill would one day help with Bible translation.

Jonathan grew up in Dayton, Ohio. Since his mother was an artist, their home was filled with a ready supply of markers, paper, paints and glue. So during times when he needed to concentrate, Jonathan would often find himself drawing.

“I draw just to focus and keep my mind active,” he says.

His interest in Bible translation began during high school, when he participated in a missions program led by JAARS, an organization that helps facilitate Bible translation. “During the week it was like God was telling me that this is something I can do,” Jonathan says. He had always loved learning languages, but now he sensed God’s calling to devote himself to Bible translation.

Once Jonathan discovered the applied linguistics major at Moody, he did not apply to any other colleges. “That’s where I wanted to be,” he said. He appreciates the professors at Moody, especially their commitment to training students to be lifelong learners of God’s Word.

“It wasn’t just filling a bucket and sending us off—it was giving us the knowledge to research well, to understand orthodoxy, to use it and share it with others,” Jonathan says.

Professor Steve Clark used his personal experience as a missionary Bible translator to equip and mentor students. “He told us that Bible translation is one of the most humbling experiences. It is basically a decade of your life spent studying the Bible verse by verse. It’s the world’s biggest Bible study.”

The summer before Jonathan graduated from Moody in 2014 with his BA in Applied Linguistics, he spent seven weeks interning with Pioneer Bible Translators in East Africa. The team was translating the New Testament into 15 different languages.

Along with his teammates, Jonathan provided data entry for a dictionary on local languages. He would enter words and the appropriate Swahili translation. The team struggled to learn Swahili the best they could during the seven weeks just to communicate basic requests. He observed the various checks and balances of the translation process.

During a staff meeting, Jonathan was doodling. The branch director looked over his shoulder and asked if Jonathan could create illustrations for the six New Testaments nearing completion.

“He needed 21 illustrations for a variety of Bible passages,” Jonathan recalls. Taking those requests, Jonathan began to research each concept. For example, how could he illustrate a large sailing vessel for people living in a land-locked area? What exactly did the stocks look like that restrained Paul and Silas in the Philippian jail? He went back to the Bible and biblical resources to illustrate as accurately as possible.

“It was such a cool experience,” says Jonathan, who used his biblical research skills to help create the illustrations. “I went around that summer in East Africa with a pen and piece of paper. I would sit down and draw something.”

The New Testaments containing Jonathan’s illustrations were published this summer and will be dedicated by the translation team. “It was something I never expected to do,” Jonathan says. “I never wanted to be a professional artist.”

Although he enjoyed this opportunity to use his artistic talent, Jonathan will continue to focus on a ministry career in Bible translation. Jonathan and his wife Megan, also a Moody graduate, plan to serve as Bible translators with Pioneer Bible Translators wherever they are most needed. They are thankful for the donors who invested in their training.

“We are not set back [financially]; we are able to build up toward what’s next,” Jonathan says.

“I am so thankful for having our tuition paid and being able to get out of school debt-free and pursue ministry much faster.”