Moody Grads Bring the Bible to the Streets 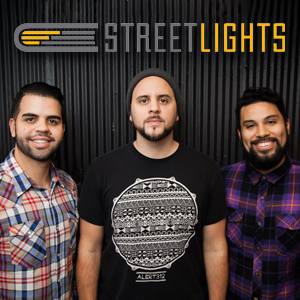 Esteban Shedd's vision for the Streetlights ministry began in a small basement on the North Side of Chicago.

"I was pouring into the lives of ten young men, juniors and seniors in high school. As we were going through the first chapter of Acts, I realized at least eight of the ten guys could not read the Scriptures."

The students were at different levels of literacy, but the Moody graduate wondered how he could effectively teach God's Word when very few could read and engage?

What If They Can't Read?

"I felt a burden that, in this multimedia age, we could do better." He noticed that all of his guys carried CD players. So he went home and recorded Acts 2 and 3 with vocals and some background instrumentals. He burned the audio recordings on CDs and gave them to his guys. "I wanted to test and see if listening would help them bridge the literacy gap."

The next time they met he saw incredible improvement. "Not only did they know some of the basic elements of the text, but they could dive deeper into the meaning of it."

The audio Bible was effective because, as Esteban explained, "It crossed the boundaries of shame, embarrassment and shut-down. That's what birthed the idea for Streetlights."

Today, Streetlights records the New Living Translation of the Bible in an audio and video format in a way that appeals to urban youth. The three-person team, Esteban, Loren La Luz and Aaron Lopez, all graduated from Moody Bible Institute in 2006.

Friends with a Heart for the City

All three men grew up in the city. Although they were not from the same Chicago neighborhoods, they knew about one another. At Moody they were drawn together as friends and brothers in Christ, but also as musicians. They enjoyed declaring Christ through the arts.

Esteban and Aaron studied Communications, while Loren pursued his degree in Biblical Counseling.

Esteban said, "Teaching God's Word is the strongest thing that Moody does. The sharpening there was phenomenal."

During his time at Moody, his appreciation for Scripture deepened. "The focused time of study at Moody was huge, diving into the depth of the historical aspects of Scripture, learning apologetics and spending an entire semester devoted to a single book of the Bible, like Hebrews."

"I also appreciated that the professors weren't solely interested in head knowledge. They were genuine and humble. It was this humble teaching of the text as the Word of God that got me."

After graduating from Moody, the three began working with GRIP Outreach for Youth. The director Scott Grzesiak believed in their vision.

Streetlights was founded in 2010, and the first volume was released in 2012. Tyndale House Publishers gave them rights to the New Living Translation (NLT) for the project. The Streetlights mission is to "use audio, video and curriculum tools to communicate the transforming Word of God in a relevant format."

They want to reach youth who have low reading levels and limited knowledge of the Bible.

"We're blown away by how the Lord has provided," Esteban said. "We have maintained a high standard of quality, although we are constantly learning. But God has given us the space and the resources to do it well."

"What's Up with Nicodemus?"

Esteban continues to see God use His Word to change lives. A 19-year-old man named Ricky moved in with Esteban and his wife a few years ago.

"I was starting to do pre-discipleship with him and eventually he came to know Christ." Esteban wondered how he could encourage Ricky to read and understand the Bible, so he told him, "I'm going to put the gospel of John on your phone. Will you listen to it 15 to 20 times before we meet again?"

Ricky agreed, and was full of questions the next time they met. He asked, "What's up with Nicodemus? And, what does it mean to be born of the Spirit?"

Esteban realized that not only had Ricky internalized the Scripture, but he had come up with his own heartfelt questions.

"Just through the audio, he had internalized the Scripture! That became one of the main discipleship tools for him."

From the Street to the World

The ministry continues to grow, relying on the generosity of audio technicians, videographers, graphic designers and many others who devote their time to the project.

The audio recordings are being used in Chicago public high schools and downloaded internationally.

"We see downloads in 85 countries. The recordings have been downloaded 18,000 times from the Streetlights website."

As they look to the future, the Streetlights team appreciates your prayers for financial support and for God's continued work through this ministry.

"Pray with us for when the Word of God is being listened to, or read in a curriculum. It's our heart as we push it out-that God's Word will not return void."

"We give glory to God," Esteban said. "We see Him directing this. We have a passion to communicate. We're not down for gimmicky attempts—we don't want or need to make the gospel cool. But we are passionate about saying 'How can we communicate well?'"