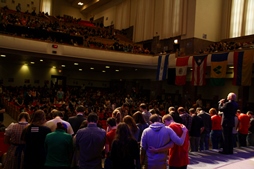 Dr. Nyquist prays for students who committed to serving in overseas missions.

Students at Moody Bible Institute were challenged during Moody’s 2014 Missions Conference to pray and commit their lives to reaching the 100 largest unreached people groups that remain in the world today. It was held Oct. 14–17 on the Chicago campus.

This year’s theme, “100: Response Required,” was inspired by the Mount Hermon 100, a group of 100 college students who in 1886 committed to serving in overseas missions at a conference organized by D. L. Moody in Mount Hermon, Mass. The Mount Hermon 100 gave birth to the Student Volunteer Movement of the late nineteenth century, which produced an estimated 100,000 missionaries by 1959. 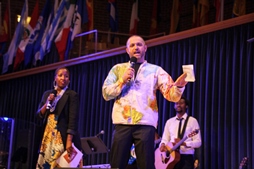 The impact of the Mount Hermon 100 on world missions ignited a passion in Clive Craigen, associate professor of World Missions and Evangelism at Moody, to pray with other conference organizers for a similar movement among current Moody students.

“The double goal of raising up 100 students to pray for the largest unreached people groups and 100 students to commit to go to the unreached was designed to be a point of reference, a rallying cry to spur us all on to a greater commitment to reaching souls for Christ,” said Craigen.

On the first day of the conference, Moody’s president, Dr. Paul Nyquist, spoke to students, faculty and staff during President’s Chapel.

“Missions Conference is one of the greatest weeks of the year here at Moody,” said Dr. Nyquist. “Students are exposed to missions on a level that they rarely experience anywhere else. This is an education into the global task that still remains and the urgency we have to get it done.”

In his address, Dr. Nyquist reported that according to the International Mission Board of the Southern Baptist Convention, a people group is considered unreached when the number of evangelical Christians is less than two percent of its population.

Throughout the week, students chose from more than 100 seminars led by missionaries, pastors, church planters and others who shared strategies for engaging unreached people groups as well as discerning the call to missions. Students also met with representatives from approximately 50 mission agencies and joined in prayer for global missions and the nations.

During the opening ceremony, students entered Torrey-Gray Auditorium carrying flags of nations, and participated in Ethnefest, a celebration of cultures and languages through worship, spoken word (poetry) and dance.

In the closing ceremony, Pastor Muriu challenged students to embrace the call to live sacrificially for Christ. “God is looking for men and women of unwavering resolve who will bring glory to His name,” he said.

Prayer groups are being formed for students to continue praying for specific unreached people groups and for one another. Representatives from mission agencies at the conference also have committed to mentoring the students to help them better discern the call to missions and make plans for service.

On Nov. 10 and 11 Moody Bible Institute in Spokane will hold their annual Missions Conference. More than 850 people are expected to be in attendance and 50 mission agencies exhibiting.

The theme, “Journey to Obedience,” based on Hebrews 11:8, was chosen by a committee of 16 Moody students who collaborated with administrators as well as the International Studies department in organizing the conference. The conference, which will include prayer, four general sessions and six time slots for breakout sessions each day (50 sessions over the two days), will examine both a short- and long-term view of missions.

Tracks for aviation, storytelling, youth ministry, church planting and more will be available. Steve and Arlene Richardson will speak during the general sessions. Steve is the president of Pioneers-USA, a ministry which “…mobilizes teams to glorify God among unreached peoples by initiating church-planting movements in partnership with local churches.” Attendees also will enjoy worship led by students throughout the conference.