Barry J. Meguiar receives the 1886 Legacy Award for faithfulness to God’s call in the workplace. 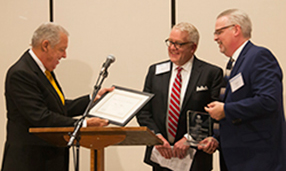 Robert Schuldt presented this year’s 1886 Legacy Award to Barry J. Meguiar, founder of Revival Outside the Walls and president of Meguiars, Inc. The ceremony took place on April 5, at Moody Theological Seminary in Chicago and marked its third successive year.

“With the 1886 Legacy Award, we are seeking to present it to someone who brings their faith to the workplace in a winsome and impactful manner, who demonstrates an outstanding use of Christian principles within their profession, and who has an exceptional Christian reputation in their business,” said Robert Schuldt, chair of the Advisory Board for Moody Theological Seminary that determines the award recipient. The award is given in honor of the memory of D.L. Moody and his vision—a vision advanced by the legacy of Moody Bible Institute as a school for equipping students to share Christ.

Mr. Meguiar’s faithfulness to honor God and follow His leading manifests itself in Meguiar’s businesses and personal life. When Meguiar left school, he entered the family business and took on a load of responsibility. Right away he knew he couldn’t manage alone. He adopted Proverbs 3:5 as his life verse and told the Lord, “I’m toast without You. You got me into this mess. You’ll have to get me out.” One day he felt especially moved by his need for guidance and sought God through heartfelt prayer. Shortly after, a stranger walked into his office and told Meguiar, “Your business is your pulpit.”

Since then Meguiar has used his businesses as a pedestal to share the gospel with lost people and encourage other Christians in sharing their own faith. “The great commission isn’t just for the gifted,” says Meguiar. “Jesus didn’t say, ‘All you who are gifted or trained or paid go into the world.’ Jesus said, ‘Go into the world,’ to all of us.” Meguiar wants to see this message of everyday evangelism not just taught by churches but acted on.

In his personal life, Meguiar has shared his faith daily for over 40 years. He approaches evangelism with the assumption that everyone is lost. For him, it’s not about how much Bible he knows or his ability to speak—it’s about faithfulness to show the love of Christ. “Jesus says, ‘They’ll know you’re my disciples by your love,’” says Meguiar. “It’s easy for us to love people. We don’t need any eloquence for that. We just have to love people, but we love them in Jesus’ name.”

Meguiar has been a guest multiple times on Moody Radio morning shows and National Programs to equip and inspire Christians to share their faith through evangelism. His one-minute daily feature “Ignite” is heard on stations across the Moody Radio platform.

Last year, Moody Theological Seminary invited Meguiar to speak on apologetics. Remembering the invitation, Meguiar chuckles at the irony of a businessman who sells car products giving a lecture to seminary students. In his eyes, Meguiar doesn’t see his experience serving God as academic. He speaks from personal experience. “When you’re sharing your faith,” says Meguiar, “You’re kind of in the business of apologetics—not necessarily in ways that seminary students would say it, but in a way that people will understand it and receive it.” Meguiar sees himself as a product of scripture. Only from God’s Word does he have the ability or authority to share the gospel in a way people can receive.

Looking back at his life and ministry, Meguiar sees the faithfulness of God and says, “He’s been there every step of the way. . . I give it all back to Him.” Looking forward, Meguiar has one desire: to see the Church as a whole fulfill her mission to reach the world with the good news of the gospel. In Meguair’s words, “Every day is fresh. God moves people across your path—these are lost people. And God loves them just as much as He loves us.”