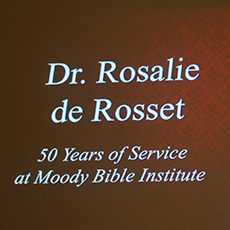 “I’ve had more than eight thousand students,” says Dr. Rosalie de Rosset ’76–’15, communications professor who celebrates 50 years at Moody Bible Institute in July 2019. “I love my students. I love talking to them about their lives, their struggles, and the way Jesus meets them. I’ve grown up with my students.”

Two years after beginning her career writing spots and scripts for Moody Radio, Moody asked her to teach a class. “There were seven students in my first class,” de Rosset remembers. “I’d never said I would teach, or even felt called to teach, but it was magical.”

She earned her master’s while working in radio and teaching two courses a semester on the side. In the fall of 1974 she joined the faculty full-time.

The Moody where de Rosset “grew up” looks different from Moody today. “I remember almost every building on campus opening except Fitzwater. Our gravel parking lot extended behind Doane. An old Masonic temple that Moody bought and used as a gym stood where Dryer lawn is,” she recalls. “There was a sweet shop under where The Commons is today and a pecan roll with a coffee cost a quarter. The original D. L. Moody building was still in the plaza.”

Architecture isn’t the only thing that’s not the same. “There used to be chapel five days a week, and early curfew, and rules about everything,” de Rosset notes. “The Moody culture is different than it used to be.” But over the years, as things around her have changed, de Rosset has stayed consistent in teaching and character—and that’s attracted students to her again and again.

In addition to earning her MDiv and PhD from other institutions, she’s taken more than 20 undergraduate classes from Moody—including a class from Dr. Michael Rydelnik ’77, one of her former students.

During a special assembly on Tuesday, April 30, she was honored and recognized for her decades of faithfulness and given not one, but two standing ovations.

One of her former students, and now senior vice president of media, Greg Thornton ’80 says, “Moody Publishers was privileged to partner with Dr. de Rosset on the publication of her book, Unseduced and Unshaken. She challenges clichés and ordinary thinking, and pushes us to think deeper and say things that really matter.” 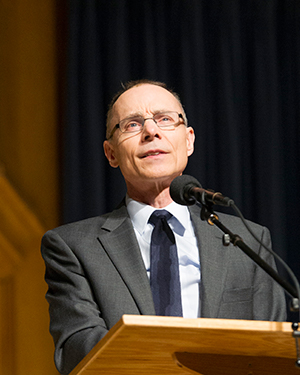 Dr. Michael Rydelnik spoke of her as a teacher, colleague and friend. “The way Rosie taught was different every day. Some days she read to us. Other days she had us read essays to one another,” he recalls. “My students tell me what they love about Dr. de Rosset. They love that she’s direct, plain-spoken. Her students always feel loved, even when being critiqued. They tell me they’ve learned tons about literature, but far more about life. She is deeply committed to the Lord Jesus and she cares about the mission of this school: To honor the Lord Jesus and proclaim the gospel, and to teach students to do that as well. That is why she’s stayed all these years.” 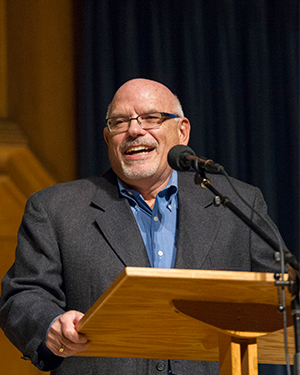 Concluding the event by presenting her with a massive bouquet of roses, Dr. Mark Jobe ’84 spoke about his time as de Rosset’s student. “I dragged my feet into your English class when I was eighteen, but quickly I perked up. You made me feel challenged,” he remembers. “You made me feel like I needed to strive for excellence. Your classes are more than just literature and English—behind them there’s a heart, a deep passion for God that came out in a very profound way. I want to say, on behalf of all the current students, former students, colleagues, and the Moody family as a whole, thank you.”

Now after 50 full years—sometimes trying, always rewarding—she remembers valuable lessons. “I’ve learned that as a teacher you must be approachable without surrendering authority,” de Rosset says. “The most important thing you can do is to be humble and teachable and to encourage both in your students.”

Fifty years is a long time to stay somewhere but de Rosset has a good reason. “God is good, His grace is profound, and my students have made teaching a marvel of an experience. It is God that has kept me here, it is God who has given me everything. There is nothing I owe to anybody but the Lord, and the life He has given me is absolutely spectacular.”