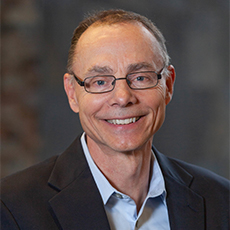 “Recognizing Greg for his life’s work in this way was an honor,” said Randy Fairfax, chair of Moody’s Board of Trustees. “His Christ-like manner is an example for others to follow, especially his prayerful commitment to advancing the Word of God through his role with Moody’s media ministries, and his service in to his local church and other ministries around the world." 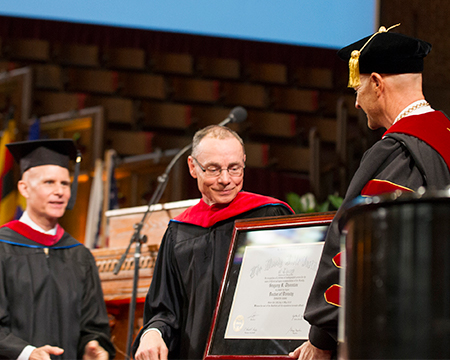 “I can’t express enough Moody’s gratitude for his serving as interim president,” Fairfax added. “He is a humble, gracious man and I pray that the Lord gives him many more years to bear fruit for the kingdom.”

A few days before commencement, Thornton was honored at a campus event where students presented him with a custom printed T-shirt: “World’s Best Interim President.” Unassuming by nature, Thornton earned widespread student support with a leadership model based on one of his favorite verses, Micah 6:8: “He has shown you, O man, what is good. And what does the Lord require of you? To act justly and to love mercy and to walk humbly with your God.”

Thornton graduated from Moody in 1981, married Grace the next day, and then started a career at Moody Publishers. Rising quickly through several positions, he became director of advertising and sales promotion in 1985, then was promoted to vice president in 1992. Notably, under his leadership Moody Publishers began digital publishing as well as acquired Wingspread Publishers (2013), which includes authors such as A.W. Tozer.

In addition to his service at Moody, Thornton has been involved in the local church all his life, as a Sunday School superintendent, a deacon, teaching financial stewardship classes and currently as an elder. He also served on the boards of ministries around the world. 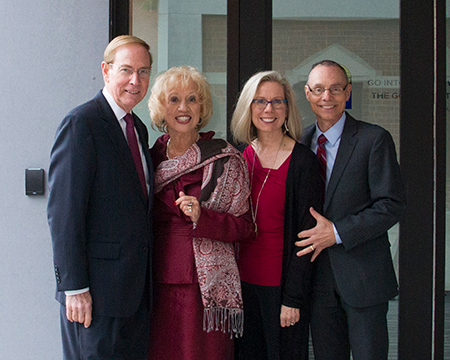 Greg and Grace Thornton with Dr. Gary and Karolyn Chapman during the dedication of the Chapman Center, new home of Moody Publishers and Moody Radio.

He was on the board of the Christian Booksellers Association for many years, and was also the chairman of the board of Media Associates International, a global training ministry that equips and encourages Christian publishers, editors and writers in challenging places of the world.

Thornton additionally served on the advisory boards of Naomi’s House—a ministry of The Moody Church, where he and his wife attend—and Revive Our Hearts, an outreach of Life Action Ministries. Naomi's House offers hope and healing for women in the Chicago area who have been sexually exploited, and Revive Our Hearts is well-known for conferences and a nationally syndicated radio program of the same name, hosted by Nancy DeMoss Wolgemuth.

He and his wife, Grace, have been married for 38 years, have three married children, and seven grandchildren.

Thornton continues in his current role as senior vice president of media which includes oversight of Moody Publishers and Moody Radio.