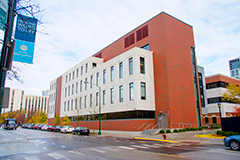 Moody Bible Institute, an organization that has already trained generations of Christian leaders around the world, distributes millions of books and provides biblically-based programming through one of the oldest Christian radio networks in the country, today dedicated its new global media center, The Chapman Center.

A look back at the dedication ceremony
and ribbon cutting for The Chapman Center.

One of the most technologically advanced and integrated Christian media centers in the world, the 4-story, 50,000-square-foot facility for the first time in Moody’s history will unite its media ministries of Moody Radio and Moody Publishers under one roof on the Chicago campus.

In remarks earlier today at the dedication ceremony on Moody’s Chicago campus, Greg Thornton, Moody’s interim president and senior vice president of media, reflected on the extraordinary opportunity that The Chapman Center offers. “By our media ministries being located in one space, it will bring about unprecedented collaboration and innovation in the area of biblically-based media content creation and further position Moody as the leader in equipping people with the truth of God's Word across the globe, cultures, and generations through innovative, integrated media technology,” said Thornton. “This, indeed, is the beginning of an exciting era in Moody’s 133-year history.”

Dr. Mark Jobe, who was recently appointed to serve as Moody’s 10th president, was present for today’s dedication and ribbon cutting ceremony. 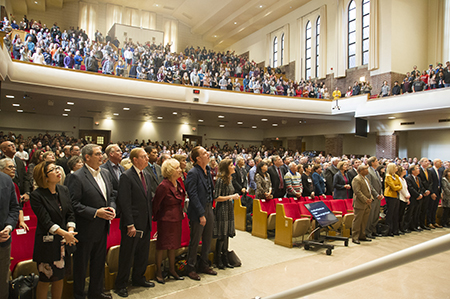 “Today we celebrate God’s amazing provision of a powerful tool through the faithful stewardship of His people, the impact of which will transcend the globe, cultures and generations, not to mention our own life spans,” said Randy Fairfax, chair of Moody’s Board of Trustees, who participated in today’s dedication and ribbon cutting ceremony. “We can only imagine the impact of the work that will be done in this strategic space, and the students, staff, faculty, authors and broadcasters it will bring together. But we know for certain that it immediately elevates Moody’s ability to equip people with the Truth of God’s word and launches a new season of growth and innovation.”

After Moody student Samuel Forshtay led in worship and student leaders Sara Nimori and Aaron Houillon read from Psalm 67 and Matthew 28:16-20 during today’s dedication ceremony, Dr. Chapman addressed those in attendance. He reflected on Psalm 71:17-18, which he read on Sept. 2, 2014, the day he and Karolyn decided to provide the cornerstone gift for the future building. “When I read those verses, my mind immediately went back to when I was 17 years old and came to study at Moody Bible Institute, and the tremendous impact that had on my life,” he said. “It was here that I learned how to study the Bible, and it was here that I learned how to apply the Scriptures to life so it makes a difference in the way you live. Karoyln are I deeply grateful to be part of this and celebrate what God has done and what he will do in the future through The Chapman Center.” He and Karolyn are parents of two grown children, and live in Winston-Salem, North Carolina, where he serves as senior associate pastor at Calvary Baptist Church.

The Chapman Center is funded principally by a cornerstone gift from Dr. Gary and Karolyn Chapman. Dr. Chapman is a 1958 graduate of Moody Bible Institute and author of Moody Publishers’ #1 New York Times bestseller, The 5 Love Languages. He speaks to thousands of couples nationwide through his weekend marriage conferences, and can be heard on two nationally-syndicated Moody Radio programs. 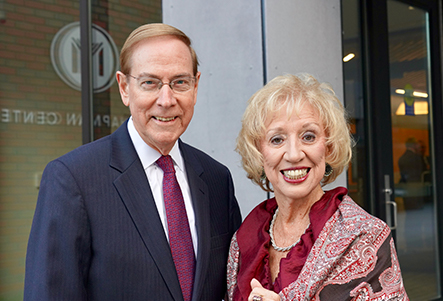 Following the dedication ceremony which took place in Moody’s Torrey-Gray Auditorium, a brief ribbon cutting in front of The Chapman Center was held. Thornton read from Psalm 90:17 and led everyone in a time of prayer for the work that will be done in the building. Fairfax concluded by reading from Colossians 3:23-24 and prayed for those who are and will serve in the building, which is the first to be built on the Chicago campus in more than 20 years.

The idea for this strategic space was first discussed in 2010 while education, radio and publishing were engaged in strategic planning around the vision of “across the globe, cultures, and generations, Moody will equip people with the truth of God’s Word using new technology in an agile and innovative community.” Moody’s media ministries envisioned a space in which they would serve side-by-side in the same building, developing content and resources together and expanding the reach and ministry of Moody. 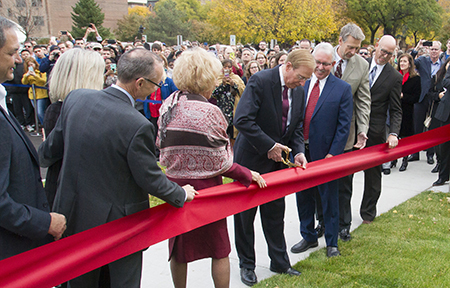 New and relevant multimedia content will be created, and radio and publishing teams will also collaborate on training and outreach to international broadcasters and missionaries around the globe. In addition, the modern and high tech working environment will support the next generation of Moody students, Christian authors and broadcasters.

Students will also have unprecedented opportunities to learn from and serve alongside Moody professionals, whether their career interest is in broadcast or written communications, or how to effectively use new media, including digital media, in their future pastoral, teaching or ministry outreach activities.

Two other areas are housed in The Chapman Center, which has been erected on the east side of Wells Street, next to the Sweeting Center. 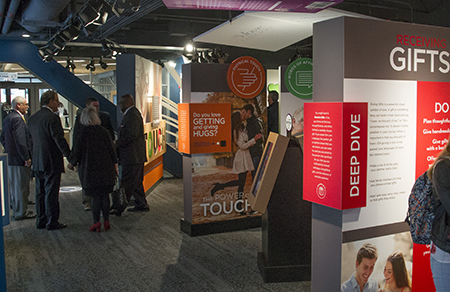 “Through the generous giving and prayers by many dear friends and alumni, as well as that of the staff, students, and faculty of Moody, the vision for The Chapman Center has become a reality and we are truly grateful to the Lord,” concluded Thornton.

Local leaders including deputy chief of staff for Mayor Rahm Emmanuel, Vance Henry, and Alderman Walter Burnett Jr., were on hand for today’s activities. Representatives from ministry partners of Moody, along with several current and former trustees were also in attendance.

A look back at the construction of The Chapman Center.

The Chapman Center was designed by Chicago’s Shive-Hattery Architecture and Engineering, and constructed by Berglund Construction, also of Chicago.