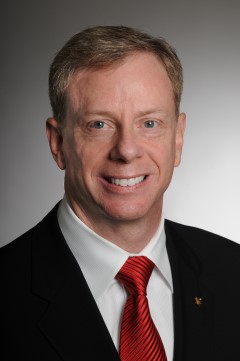 “While a number of qualified candidates for COO were identified during our recent search, it became clear to me and other leadership that while Mark has been serving in an interim capacity and was not included in the search that he would serve extremely well in this role,” said interim president, Greg Thornton. “I have relied heavily on Mark the past year, and appreciate his depth of business knowledge and wisdom, which has brought stability to Moody and leadership in the areas for which he will oversee. He will also bring a needed continuity for our new president, which is vital.”

Dr. Mark Jobe, who will begin serving as Moody’s 10th President on Jan. 2, 2019, was on hand for today’s announcement. “As I step into the presidency I am excited to announce the appointment of Mark Wagner as the new COO. Mark is a tested and proven leader with years of experience that will be a tremendous addition to the Moody team,” added Dr. Jobe. “More than that, he loves the Lord and is deeply committed to Moody’s mission of impacting the world for Jesus. I look forward to serving with him.”

As a member of Moody’s executive leadership team, Wagner will oversee the day-to-day operations of Moody Bible Institute. Facilities, Fundraising, Human Resources, ITS, Legal, Marketing and Strategic Communications, and Public Safety will report directly to him. Wagner has also been serving as a member of Moody’s Board of Trustees for the past 10 years, a role he will resign as he begins his tenure as COO.

“Being asked to serve in this capacity was an unexpected honor, and I’m humbled to transition from serving as a trustee to now the COO,” said Wagner. “Moody has a long and storied history, and I look forward with great joy to help Moody successfully transition into this next season under Dr. Jobe’s leadership. It is crucial that our business operations are running effectively and efficiently so that we may continue equipping men and women to transform the world in the name of Jesus Christ, and grow the impact of Moody’s ministries for the Kingdom.”

Wagner earned a B.S. in Marketing from Northern Kentucky University, and an M.B.A. from Western New England College in Springfield, Mass. He is active on several boards in the Chicagoland area, ranging from community cultural activities to services.

He and his wife, Mimi, have been married for 27 years, and are actively serving at The Moody Church in Chicago. They live in suburban Chicago.