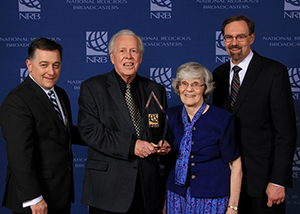 Mike Kellogg, 42-year broadcast veteran and retired senior announcer for Moody Radio, was inducted into the National Religious Broadcasters (NRB) Hall of Fame on Feb. 25. The ceremony took place during the NRB’s Media Excellence Dinner, an event held each year during their convention in Nashville, Tenn.

The Hall of Fame represents the industry’s most prestigious honor and is awarded to an individual NRB member for their “invaluable contribution to the field of Christian communications, exhibition of the highest standards and evidence of faithfulness in Christ.”Kellogg joins previous Hall of Fame inductees such as Billy Graham, James Dobson, Kay Arthur and Chuck Colson.

“This induction to the 2015 NRB Hall of Fame is an honor,” said Kellogg. “A very long time ago, I gave my life to Christ with a passion to please Him. I enjoyed organizing words and articulating them with the sensitivity of a voice created for Him.” He added, “The gifts and tools are from God....the Glory His!”

Kellogg is best known for serving as host of Moody Radio’s Music Thru the Night from the program’s inception in 1982 until its conclusion when he retired in July 2014. The program featured Kellogg’s biblical insights, encouraging stories and inspirational music.

“Mike has one of the most trusted and recognized voices in Christian radio,” said Greg Thornton, senior vice president of media at Moody Bible Institute. “All of us at Moody who know and love Mike are thrilled that NRB is recognizing his faithfulness to Christ and broadcast excellence with this prestigious award.”

Kellogg’s career with Moody Radio began in 1972. The award-winning senior announcer was heard on Moody Radio's two-minute daily broadcast Today in the Word and has been featured as a columnist for the companion monthly devotional Today in the Word. Over the years, he also taught English, speech and oral interpretation classes at Moody Bible Institute, directed and performed on numerous radio dramas and recorded audio versions of Scripture including the New Living Translation.