2015 Alumnus of the Year Award 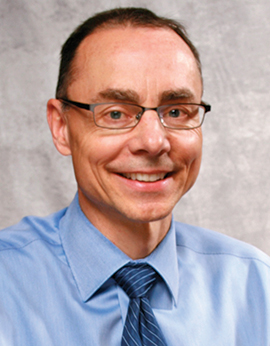 The award was announced at The Moody Church during the Feb. 3 evening session of Moody’s Founder’s Week conference. The annual award honors a graduate who has “demonstrated loyalty to the Kingdom of Christ through honorable character, ardent service and accountability to the Word of God.”

“Moody is proud to honor Greg,” said Nancy Hastings who presented him with the award. Hastings serves as the executive director of Moody’s Alumni Association. “We are deeply grateful to the Lord for Greg’s commitment to proclaiming the Word of God through his role with Moody’s media ministries, as well as in his own personal walk with Christ. He is a very gracious man whose gentle spirit exemplifies a deep love for the body of Christ and faithfulness in serving his Lord and Savior.” She added, “Greg’s dedication is evident in all he does and it’s our prayer that his ministry will continue to bear fruit for the glory of God.”

Thornton was born in Chicago in 1958 and was the second of four children. He gave his life to Christ at the age of eight after hearing the gospel during an Awana meeting at Woodside Bible Chapel in Maywood, Ill. Upon returning home, he spoke with his mother about the message and gave his life to Christ that evening. His father became a believer around the same time. Greg, his dad and older brother were all baptized together.

When he was 10, his family moved to McHenry, Ill., where his dad owned and operated a sod farm. Thornton had begun working on the farm at age five, picking up rocks from the fields for a penny apiece. By age 10, he was learning how to drive a manual transmission truck, and in subsequent years, how to drive fork lifts, run irrigation, and to deliver and lay sod. Thornton learned much of his work ethic from his father whom he says, “ran his business with integrity, always paid his bills on time, treated customers well, and gave them the best product and service.”

Thornton enrolled at Moody Bible Institute intending to become a pastor, but he quickly realized that he instead wanted to combine ministry and business. He graduated on May 22, 1981, married Grace on May 23, and began his career at Moody Press (now Moody Publishers) on June 1 of that year, as advertising administrator. Within a year, he was the advertising and sales promotion administrator and by 1985, director. In 1992, he was promoted to vice president for Moody Press, and in 2011 became senior vice president of media for Moody Bible Institute, overseeing Moody Publishers and Moody Radio.

“Greg is a man of integrity, and his work ethic and commitment to excellence in every aspect of his job serve as a Christlike example to everyone,” said Dr. Paul Nyquist, president of Moody. “Because of his leadership, our media ministries are equipping more people around the globe in the truth of God’s Word than ever before in Moody’s history.”

In addition to his service at Moody, Thornton has been involved in the local church all his life, as a Sunday School superintendent, an elder, a deacon and teaching financial stewardship classes. He also serves on the boards of ministries around the world.

He was on the board of the Christian Booksellers Association for many years, and currently serves as the chairman of the board of Media Associates International, a global training ministry that equips and encourages Christian publishers, editors and writers in challenging places of the world. Additionally, Thornton serves on the advisory boards of Naomi’s House—a ministry of The Moody Church, where he and his wife attend—and Revive Our Hearts, an outreach of Life Action Ministries. Naomi's House offers hope and healing for women in the Chicago area who have been sexually exploited, and Revive Our Hearts is well-known for conferences and a nationally syndicated radio program of the same name, hosted by Nancy Leigh DeMoss.

He and his wife, Grace, have been married for 33 years, have three married children, two grandchildren, and another grandchild on the way.