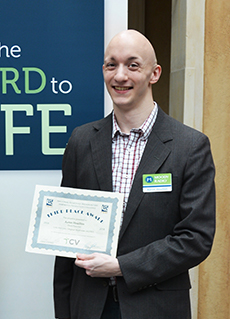 When Aaron walks into a dark room and holds a tape recorder up to a lightbulb, he’s not going crazy—he’s capturing award-winning sounds.

On Feb. 28, at the annual National Religious Broadcasters convention in Nashville,  Aaron Houillon received the NRB Intercollegiate Radio and Audio award for an Original Short Form Feature. He was awarded for his sound engineer role in the radio drama “Little Red Lines.”

“Winning this award has been exhilarating,” said Houillon, “but it also reminds me of the value of what I do—what use is a good story if no one can hear it?”

After leaving college a few years earlier for health reasons, Aaron planned to join the U.S. Army so he could afford college. At a summer barbecue a friend mentioned Moody Bible Institute’s (MBI) paid tuition, and Aaron looked into it. When spring rolled around, Aaron wasn’t at boot camp. He was at MBI.

“I wanted to get a theological foundation for my technical skills,” Aaron says. “I’d been doing personal video and audio projects for a few years, but I felt like my growth was stalled.” He auditioned for “Little Red Lines” because of his personal voice-over work for videos and audio clips. Instead of receiving a vocal role, he was assigned to run the audio team for Illuminate Productions (a student-run radio drama group)—comprised of just himself.

Now in the second season of “Freeze-Brain Coffee and Tea,” a serial radio drama, Illuminate Productions has grown to an audio team of 10 and a cast of 25.

“Little Red Lines” explores violence and racial segregation in a Chicago 150 years in the future. A group of friends from the “right” side of the tracks meet people from the “wrong” side, and discover they have something in common: a love for music.

Aaron used MBI’s student radio lab and industry-standard broadcast equipment to record the spoken audio. When he couldn’t find the right effect in the audio library, he borrowed a field recorder and searched the Moody campus for the perfect sounds—an old light bulb fizzling on, or a 1973 turntable needle rubbing a record.

“I went through the script and put myself into the story and tried to imagine it,” Aaron said. “For everything the characters did, I built up sound effects so I could see the story with my imagination, not just my eyes.”

Aaron’s Moody classes taught him the value of radio. “It’s easy to think no one will listen to a radio drama,” Aaron reflected. “Professor Kammerzelt impressed on us the importance of being the creative communicators that God made us to be, no matter what medium it takes.”